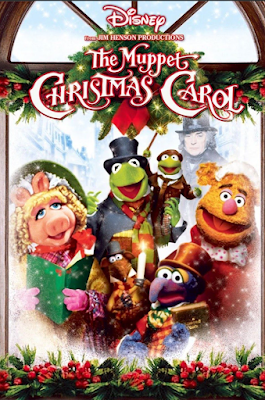 You don't need a full synopsis because it's A Christmas Carol with Muppets. Sir Michael Caine plays Scrooge, Kermit is Bob Cratchit, Gonzo and Rizzo are narrators, and more characters join the tale throughout. It came out in 1992.

This film is a musical (in my opinion). The majority of songs are original... and catchy. I sat down to watch this and (while I didn't remember each cameo and punchline) I remembered every melody the second it began. Unfortunately, the version on Disney+ didn't include Belle's version of "When Love is Gone", which made it quite awkward during her and Scrooge's parting; there is also a happy version at the end when Ebenezer changes but doesn't really work without the first one.

The slapstick and other jokes are cute, but I only laughed out loud once. There is no gross humor (a plus). Miss Piggy's reaction to Scrooge as Mrs. Cratchit was over the top extra... just how I like her.

The Ghost of Christmas Present is uncanny—moreso than Christmas Yet to Come. They were all original creations instead of casting humans or certain Muppets save for the Marleys who were played by Statler and Waldorf. It was an interesting choice.

I have to circle back to my mention of cameos because I don't mean a bunch of celebrities—it's all the Muppets! Fozzie Bear's mother is in the scene at Fezziwig's. Sprocket (from Fraggle Rock) was in the background later in the movie. The snowman from A Muppet Family Christmas has his head knocked off, and a turkey near the beginning also looks like a character from that special. It's a true delight for a fan.

I'd recommend this for an annual viewing unless you despise A Christmas Carol or several musical numbers in your movies.