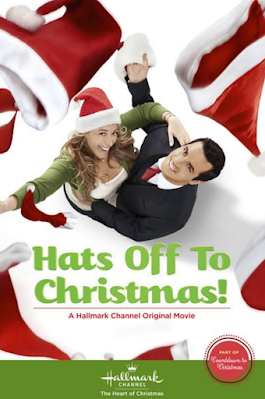 Note:  I had no idea there was a disabled person in this movie before watching it.

Mia, the loyal and hard-working manager of her small town's Christmas hat shop, is blindsided when her boss of over 10 years asks her to train his son, Nick, for a vacant upper-management position that Mia had been coveting. - From Hallmark's website

There is more to the synopsis, but that's about all Brandon and I saw on the streaming service. We jumped in. Would Nick be Santa Claus' son? What would it be like for a woman in a Hallmark movie not to go back to her small town for Christmas?

Nick starts off a cold jerk. He reluctantly agrees to help his father save his business. He wants to look over the books and not get his hands dirty with seeing how the store is actually run. All of that changes, of course, when he meets the heroine—well, he changes when he meets her son.

Scotty was in an accident with his father. His father died in the accident, and Scotty was left an incomplete paraplegic. For the first few scenes of the movie, you always see Scotty by a table and assume he's able-bodied. But, when Nick sees him for the first time, you actually see him rolling around in his wheelchair. This is a classic shock reveal of disability; Nick is mirroring the shock the writers are hoping the audience experiences.

After seeing that Scotty is disabled, Nick's personality does a 180. He becomes friendly and engaged almost immediately with everything he wasn't before. It was magic!

There were more scenes with Scotty and Nick than there were with Nick and Mia building their relationship. If anything, it seemed like Nick and Mia were friends more than a couple. Somehow, they end up together. I understand a single mom might find a man who is very interested in her children appealing, but there didn't seem to be any good scenes to showcase their growing attraction. Mia's friend would talk to her about Nick like they were interested in one another and all I kept thinking was: "Is this what they're resorting to in order to clue us in for the first half of the film?" Yes, it was... along with Mia's jealousy.

Another woman (Valerie) makes overtures to Nick on occasion... an old high school flame. She's framed as everything he could possibly want in a woman: Slick, successful, and "big city" like him. But, as Nick's affection grows for Mia and everyone around him, the viewer starts to see the differences between Valerie and Nick. This was the film attempting to show Nick's change during the few months he'd been in town.

Secondary characters were okay but nothing too special. The bumbling father owns the business. Mia's friend acts as Scotty's babysitter and her confidant without personality of her own. A guy at work is there to show how affiable Nick has grown and what a generous heart he has when he buys him and his daughters dinner after hearing of their difficult time.

The store itself is Christmassy, but nothing overly Christmassy happens until near the end; Halloween and Thanksgiving are also covered in this a little. The cinematography is okay.