A bit over two years ago, I wrote a post on the news that my horror collection Blighted Feast would be coming out via The Poet's Haven. I spoke with the editor a few times right after the acceptance but received no updates afterwards. I assumed, since he was a solo operator, that things just got busy for him. Emails I sent asking for updates or how he was went unanswered.

The name he used as a publisher was a pseudonym. A couple of weeks ago, I went searching for news of him and found his legal name. My publisher died two years ago this month. The night I learned this was spent in quiet mourning for a man I barely knew. He seemed like a decent fellow, and I'm sorry I didn't get the chance to work with him.

A few days later, I thought about what to do with Blighted Feast. It's already a couple of years old. Do I self-publish, or do I get back into the submission grind knowing most presses won't touch horror poetry books? I've come so close to seeing it in the world twice now, and it's getting disheartening.

I found one publisher who might be receptive to my work (their old magazine even featured people my work has appeared beside). They are currently considering a sample of the collection. It might be my last shot going the traditional publishing route. But, I'm not sure I can hack the self-publishing landscape... I'll keep you posted.

For one month only, I will be doing Philantreon on the blog. You can check out how it works on the page at the top of the screen or just by clicking here. If you have any questions, please don't hesitate to ask. If there is something you want to see that isn't there, we can talk about it.

I rejected the idea of one of the tiers being an "Ask me Anything" post because few people actually want to know something about someone as boring as me. Maybe because I'm an open book...

I'm nervous about the possibility of singing, but I will do it (possibly terribly) if conditions are met. No promises on quality.

Well, that's about it! If you haven't seen my poem at Granfalloon, it's here. My poems/drabbles at New American Legends are up, too.

Our Garden (a Poem)

We grow weeds among flowers,
betrayers of green-sap warmth…
an ice age by degrees. Vegetables
never reach the hot-tub pot to perish
in nutritional bliss. They struggle beneath
a shady sun. We turn away, overgrown
and outwitted, our black thumbs rest
on our fist-tops… carrots as spindly
as our love. We can resuscitate neither.
at Monday, June 07, 2021 4 comments:

1. Philantreon will commence on a trial basis with perks listed in the middle of next month.
2. In case you missed it, I have new poetry out here and here.
*~*
I was talking with writer/artist Su Zi a while back about my micro chapbook iCripple. It's difficult to get a micro published, especially one that takes on disability so blatantly. Through her, I met another disabled person who has a new press with a disability focus. Su told me to submit my chapbook to him, but I refused.
I don't want to manipulate or use connections in order to get published because I feel it's wrong. The writing should be what stands out and matters... not who I know. How do you even tell if you're any good if you get somewhere based on networking and not skill? How is it fair to jump the line?
Su Zi, like my baby brother in the past, told me that utilizing connections (in polite ways) is how it works in artistic arenas. She said my idea of being discovered through excellent work is a unicorn... something not done in decades.
Modern poets don't really see the fame novelists can potentially reach, even our laureates and Instagram stars. I should probably cling to every opportunity (few to begin with) crossing my path as a way to combat the obscurity that is sure to plague my career. My "misguided idealism" may be why my fan base is at ten people... but, they're an amazing ten.
at Monday, May 24, 2021 4 comments: 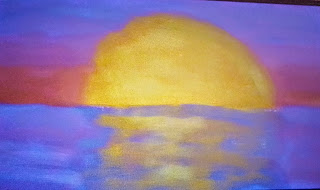 I have an idea I’d like your feedback on. For months, I’ve kicked around the thought of a Patreon system where the supporters receive perks but give to charity instead. Introducing Philantreon.

Philantreon is like Patreon… except for a few key differences:

3. You pledge your time, talents, supplies, or money to a charity/cause.

I’m going to add a page on this blog with perks and how much they’re “worth”. You agree with whatever tier you think is feasible for you, and I will deliver the rewards. As an example: If you pledge two shelf- stable food items to your local food bank, I will put a new poem on the blog (incorporating a word of your choice).

The higher the tier, the “better” the rewards. Maybe, at top tiers, I’ll send people something through the mail (like an art print from one of my photographs/paintings or handmade earrings).

I realize that (for some of the levels) proof won’t be easy to come by. Also, there are so many ways to give that I probably can’t cover all scenarios. I’ll try not to demand support for an organization or cause because not everyone is passionate about what I am. (I would prefer people not give to those who discriminate against minorities.)

Since the pandemic, more writing and bookish events have gone virtual. The switch opened up the world to those who are unable to travel or afford attending conferences, workshops, and classes (though some are still too pricey). Zoom and Google Hangouts are now the hushed chatter before a panel or grabbing drinks after a reading.
I'd love to do a reading series for all kinds of poets via Zoom. It would be a boon to The Handy, Uncapped Pen if I could start classes or a type of conference with camera capability for my community. The Speak Easy Project has some incredible instructors for poetry (and financial aid), and yet I can't bring myself to apply. Beyond my lack of technological prowess is something much more difficult to overcome... my shyness.
I'm uncomfortable in the spotlight and on camera, but I can't pinpoint when it all started. It didn't used to be this way. Maybe I'm just more self-conscious or out of practice. A lot of people feel the same, but none of the myriad of resources or tips I've come across have actually helped. And, being disabled adds an extra layer of complexity to my interactions.
Perhaps, if I just dive into it, I'll end up desensitized to my fear. Too bad every "kiddie pool" approach still has me shaking in my floaties.
Is there anything that helped you during virtual gatherings with strangers?
at Monday, May 10, 2021 No comments:

The "Success Machine" is Jammed

People are often told success has to look a certain way, and the milestones that signify said success must be reached at approximate ages. Owning your first home happens in your 40s at the latest. Your career should be established by the time you are in your early 30s. There is some space for deviation, but the wiggle room is only permitted if you have already reached other goals (like being a parent).
If you are someone who doesn't meet the expectations silently fastened to your back when you become an adult, you're considered a failure. Late bloomers are okay... provided they blossom seemingly all at once and in the acceptable directions. Otherwise, you're a "waste of potential" or worse.
A lot of people feel this keen nervousness and check their progress against their peers' frequently (though this tends to calm itself when people reach middle age). It can foster insecurity and jealousy. And, in a society so focused on pixel-perfect Instagram posts, it's a potential recipe for disaster.
*~*
It's difficult to pull myself away from the "hustle and achieve" mindset because it's the only model that was presented to me from little onward. I will never do most of the tasks required to be viewed as a success (no driving, no traveling, no children, no real career, etc.), and I have few other metrics as a guide. Sometimes, I feel like I'll never do/be anything worthwhile. There is no envy or comparison for me... just a list I can't finish. A list so engrained within me, that I don't even know how many of those objectives would be fulfilling.
My sense of self is directly tied to my accomplishments. I could be the funniest, kindest, and smartest person in America and it would mean nothing unless I did things with those traits. It's not enough. I must push myself relentlessly. I've worked myself sick numerous times. My amount of accomplishments is paltry.
*~*
What I often fail to see is that I have a unique opportunity:  Since I'm so far on the fringes of society, I can safely rewrite what long-term success looks like without true repercussions or judgement. I can throw out the manual. But, the possibility feels a little too impossible because I don't know where exactly to begin.
Perhaps Albert Einstein will give me a hint:  "Try not to become a man of success but rather try to become a man of value." Seems like solid advice to me.
at Monday, April 26, 2021 3 comments:

Get Posts by Email!