Not a Movie, but Let's Talk About "Baby, it's Cold Outside' 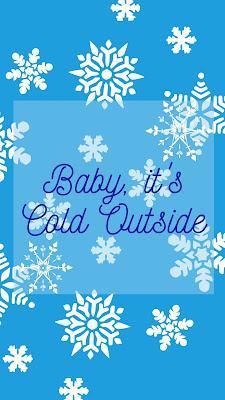 Note:  I'm breaking away from movies because I feel it's important to talk about this.

There is a controversy that cracks through the ice and waddles off the rink each holiday season. Is "Baby, It's Cold Outside" a predatory song? She does say no to him, after all. He is persistent. But, I think people decrying it because of the undertones aren't looking deep enough.

They've already had an evening together. It's amicable thus far. She acknowledges they had a pleasant time.

My mother will start to worry (Beautiful, what's your hurry?)
My father will be pacing the floor (Listen to the fireplace roar)
So, really, I'd better scurry (Beautiful, please don't hurry)
But maybe just a half a drink more (Put some records on while I pour)

She asks for the drink. He says "please don't hurry". He is asking her to linger, and she seems to want it, too.

The neighbors might think (Baby, it's bad out there)
Say, what's in this drink? (No cab's to be had out there)
I wish I knew how (Your eyes are like starlight now)
To break this spell (I'll take your hat, your hair looks swell)

She keeps thinking about the judgment she'll receive more than anything else and seems worried about being labeled a slut. "I wish I knew how to break this spell" means she finds him irresistible. He sweeps her under. Sounds like lust/love and not a scared filly.

One of the biggest lines people point to in order to say the song is r*pey is "what's in this drink?". Defenders of the song say that was an old joke or excuse to do what you wanted (blame it on the alcohol). I just thought he made it stronger than he usually does for her because women weren't given the strong stuff as much.

She "ought to say no" doesn't mean she wants to. She simply feels she must. He asks if he can close the distance between them but doesn't just demand or do it.

She does say "no" here, but most versions I've heard come with hesitation or a giggle on the line. She just finished telling him she feels she has to refuse his offer... not that she wants to! So, though he maybe should have pushed her out into the blizzard without a pause, perhaps he thought it wasn't what she preferred.

My sister will be suspicious (Gosh your lips look delicious)
My brother will be there at the door (Waves upon the tropical shore)
My maiden aunt’s mind is vicious (Gosh your lips are delicious)
But maybe just a cigarette more (Never such a blizzard before)
She has more worries about what people will think/say and hesitates to leave... again. Plus, the switch in his lines (from "look" to "are") indicates they are smooching in this section. If she were with a captor, why would she ask for a cigarette unless she's hoping to burn him and escape?
I’ve gotta get home (But, baby, you’d freeze out there)
Say, lend me a comb (It’s up to your knees out there)
You’ve really been grand (I thrill when you touch my hand)
But don’t you see? (How can you do this thing to me?)
When the song began, her hair looked "swell". But, she suddenly needs a comb after kissing. Another tactic to delay, or did the kissing get a little (or a lot) wild and she needs to fix it so people don't inquire as to her mussed (maybe even post-sex) hair?
There’s bound to be talk tomorrow (Think of my lifelong sorrow)
At least there will be plenty implied (If you got pneumonia and died)
I really can’t stay (Get over that hold out)
She's warning him (and herself) that there is going to be backlash from her staying with him overnight. Her mind is made up now, though. She goes from saying things like "mom will worry if I stay" to "tongues are going to wag in the morning".
Baby, it’s cold
Baby, it’s cold outside
They sing these lines together because it's the end of the dance. They are of one mind on the subject.
*~*
I realize detailed critiques suck the playfulness or emphasis out of the song. I will also acknowledge who the performers are can make it more ominous because some lack the talent to pull off the nuance required for a good version *cough* Seth MacFarlane *cough*. But, I firmly believe the original version is flirty, tongue-in-cheek sexual empowerment during a time when a woman had more people concerned about welcome guests in her vagina than she had about her (future) husband abusing her.
at Thursday, December 23, 2021