A (Decent) Dream of Christmas ($10 eGift Card Giveaway, too!) 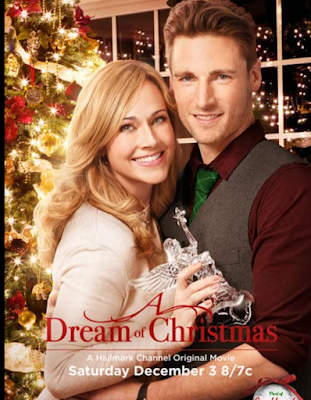 An ambitious married woman gets more than she bargained for when her wish to be single again is granted. She awakens to discover she's got everything she's ever wanted, except her husband. She resolves to find him a second time. - from IMDb

Penny lives with her husband (Stu), sister, brother-in-law, and a pack of nieces and nephews. It's a chaotic life, but everything seems to be done in love. Penny and Stewart are close and work well together. The acting is fairly good in this one, and the angel who grants Penny's wish is enjoyably passive aggressive.

Penny's whole complaint is that Stewart has to go and photograph a wildlife migration to finish off the book he's writing, and it's close to Christmas so he may not be back in time. I understand the disappointment, and it's coupled with a few other ones in her life (including the possibility she might not be promoted). But, she makes a wish to not be married anymore instead of literally anything else; she could have wished to go with Stu, that his book was already completed, or any number of other things. I will grant she was frustrated and didn't know the woman in line behind her was an angel, but it seemed excessive... even in the moment. The writers could have figured out a better way to get her to wish she wasn't married, but that would lead to Stewart actually being a jerk because nothing else would make enough sense.

There is a chance of a new guy in Penny's alternate life before she finds her husband again. He starts off as everything cliche women would want, including rich. But, even though she finds him charming, she can't shake her love for Stewart. New guy ends up being a douchebag, of course.

When Penny reconnects with Stewart in her new life, the angel has to throw a monkey wrench in the plan because it goes against what God wants her to learn. I thought the way she adjusted (or didn't) was plenty, but the filmmakers needed more conflict to get enough run time. There is also a present the angel tries to give Penny but is left behind and never explained; I have a guess as to what it was but can't be 100% certain.

Overall, it was okay. It's subverted some of the tropes in wish movies (her dream job didn't turn sour, for example) and some of the consequences were a bit more nuanced than I'm used to in films of this sort. But, nothing really sparkles here. It didn't really seem that Christmassy, either.

Thank you for reading my 12 Days of Christmas coverage! I hope you enjoyed.

Do you want to win a $10 eGift card to the store of your choice? Comment below or @ me on Twitter and let me know. Please choose a store that's easy for me to purchase for you (I will ask you for an alternate store if I can't purchase the one you want). Winner to be contacted on New Year's Eve. Void where prohibited and all that good stuff.