A Christmas Movie Christmas: Worth the Once? 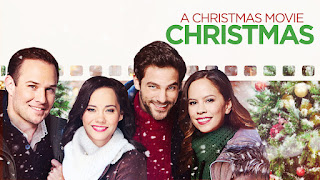 Sisters Lacy and Eve are dissatisfied with their lives. The day before Christmas, hopelessly optimistic Eve tells Santa that she wishes she can be in a Christmas movie. The next day, the sisters awaken in one.
The movie pokes fun at a lot of Hallmark-esque tropes. Tired of wondering how the heroines of cheesy films always wake up with styled hair and fresh makeup? It's addressed. Some random prince getting married in a country that doesn't exist in real life? Read all about it in the small-town newspaper!

Plot-wise, the movie was still a stereotypical meet-love-lose-find-again pattern with self-awareness that never prompts either protagonist to do something unexpected. Even the cynic just sits around for part of the movie and doesn't try to shake things up. But, no one really expects that in a nesting doll of romantic, holiday cornballs.

The actors did a competent job. Some things I laughed at for the right reasons, which doesn't happen too often in this type of movie. I could actually believe much of what the characters were feeling without witnessing anything too exaggerated or stilted.

The score was nothing I can remember offhand and the cinematography was fine.

I'd definitely recommend it to anyone who likes romantic holiday movies... and counting the tropes in each. It's like a scavenger hunt! You can watch A Christmas Movie Christmas on Hulu and Amazon Prime.

I was kind of confused by the ending (and the fact that the sisters' boss also existed in real life and as someone else in the movie world). When Lacy's boyfriend finds her in real life, he said he made his wish known to Santa. When Eve's boyfriend came to her in real life, all he said was he wanted to give city life another try. Unless that was his way of saying what the other guy said, it made zero sense... even in a universe governed by Christmas magic.

I'd like to see a sequel where the generic, cinema love interests have to navigate the actual world where things aren't solved neatly and can't be fixed by Christmas Day.
at Wednesday, December 16, 2020