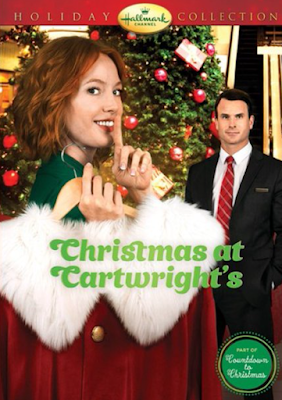 A single mom gets a holiday job as a department store Santa to help boost her finances, and then an angel enters her life and brings about some positive changes, including the spark of a new romance. - from IMDB

The premise of an angel helping people or someone getting a seasonal job at a department store is hardly a new one, but I will give this movie a few compliments:

1. The characters weren't too overacted. The angel is played by none other than Wallace Shawn (of The Princess Bride fame), who is always on point. Nicky and her daughter are okay together and have more synchronicity than Nicky ever has with Bill.

2. The villain kind of works. I disliked her but didn't feel like she was twirling a mustache while kicking puppies. She seemed like a jerk for the sake of it, though her reaction to Nicky might have partly been due to how receptive Bill (the love interest) was to her from the start.

3. When the big reveal came that Nicky was the store Santa Claus, Bill didn't behave in the manner I expected from a movie like this. I sat there waiting for the "you weren't honest" angle.

4. The film had plenty of Christmas scenes, though they mainly come from Nicky's job.

5. Even though the movie had an angel, God wasn't shoved in my face. They were quite thoughtful about what they introduced when and didn't come swinging in with the holy hammer.

Not everything was rosy, however:

1. The arc with Becky and the kid who teased her at school fell flat. I suppose it might show how forgiving Becky is or that Nicky was learning to discern things as Santa by herself (without the angel giving her assistance), but the focus on that part of the story was oddly handled. Most of the storyline to do with the daughter dragged. The daughter was also written way younger than she seemed.

2. It was comical (in a bad way) how awkward the protagonist is as Santa Claus and how all of the characters bought that she was a man. There is literally no way you can't tell. I wish it made sense in the context of the story (the angel working a miracle, perhaps) but nope!

3. The romance wasn't very warm. I don't know why, but there was a disconnect somewhere. Maybe the length of the movie and how much they focused elsewhere stunted the possibility of good scenes, or the actors just didn't have good chemistry.

4.  Some side characters were superfluous/strange. Peg, the woman who is Santa's second-in-command at the store, is a caricature of someone who is obsessed with Christmas; I was actually afraid she had no other traits until near the end of the movie. The boss just existed to give Nicky her nemesis' old job (more or less).

5. Nicky doesn't seem qualified for the huge promotion she receives at the end. Maybe it was so she didn't sue the company, but nothing really stood out in her resume or interactions to assume she's capable. Not like it matters, of course!

This movie is worth the once if you like your romance tepid, your corn set on medium, and too many scenes at an elementary school. Oh, I forgot to mention that the best friend and the caring teacher are Black and often used to prop up Nicky/Becky... a Hallmark tradition.