In Remembrance of Momma 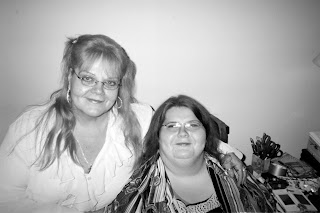 My mom died the morning of Groundhog Day of natural causes. She was 64.
Her obituary was tiny and expressed her joy of being a mother/grandmother. My older brother claimed that nothing we say would do her justice. I agree... but I want to try.
~*~
Linda Sue was born in Milwaukee to a weatherman-sergeant-turned-factory-worker and a factory worker/gender activist. She was the middle child and only girl.

She always wanted to be a mother and would often babysit other people's children. In fact, when her mother told her how babies were made, she felt cheated because she knew there had to be "a catch". Doctors told her in her teens that she'd never have children... she was heartbroken but stubborn.

She worked through social services to provide care for families who needed help between her factory jobs and bookings. My mom was a semi-professional singer for about twenty years; she was an amazing vocalist and a semi-okay bassist. She worked for free as a teacher's aide for a couple years with one of my classmates who needed one-on-one attention when I was in preschool.

Mom loved animals and had a calming effect on them. I'd call her Saint Francis because of it. She had a variety of pets in her lifetime and was an amateur expert on "domestic" birds (parakeets, cockatiels, finches, and canaries).

She had a complicated and beautiful sense of spirituality and taught her kids to seek their own truths.

Mom had untreated ADHD her whole life and would often fragment her conversations due to so much going on in her head. She had her own way of speaking when she couldn't focus that my brothers and I called "Momese" or "Mommaese" which was a combination of spoonerisms, spliced thoughts, and pauses.

Cooking at as young as four years old, my mom was an amazing cook/baker her whole life. She could eyeball amounts of ingredients and modify recipies on the fly. My older brother learned much of what he knows from her.

She could draw/paint, crochet, do beadwork, and jerry rig objects (especially with duct tape, which she loved). She never pursued creative endeavors outside of singing and cooking with any real gusto because her attention never stayed put. Proficiency was just good enough for her liking, but her talent was evident in nearly any project outside of card making (she was pretty hopeless at it).

A Christmas fanatic, mom started playing Christmas music in September. She had Bing Crosby's holiday CD when I was a kid and would play it on loop while she slept. Decorations would always go up before Thanksgiving.

She had a wicked sense of humor and plain way of speaking that people either loved or hated. She refused to pull punches and swore a lot.

Mom liked old shows like Gunsmoke (which she called "Buns" because of the ass shot at the beginning of the show), The Flintstones, Mama's Family, and The Carol Burnett Show.

She adored Italy (even learning bits of Italian) but never travelled.

Mom was honest, faithful, and kind. Her family (primarily ex-brothers) often took blatant advantage of her giving nature; it hurt her to cut their toxicity from her life, but she was better for it. She gave to strangers and spoke to them as though they'd known her for years.
~*~
My three brothers (we adopted Jacob), husband, little nephew, and I sat in a room at a dark wood table and looked at urns on a screen less than thirty-six hours after she died. We discussed the pros and cons of materials and if the urn should be her favorite color. We looked at totals for handling her body and reducing it to ash, wondering if we could pay. My brothers went to see her body while Brandon and I kept our nephew company in the conference room because I want to remember my mother alive.

We will have a private service for my mom in the spring or summer. There will be less than ten people in attendance.

My mother raised my brothers and me on her own and taught us so many things... except how to handle the loss of her.
at Monday, February 15, 2021