Christmas Cupcakes: Not Sweet or Satisfying 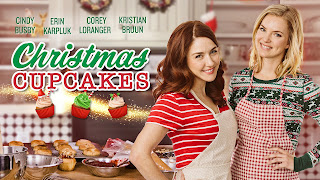 Kim and Gina agree to run the family bakery after their father's death. When they find out it's underwater, the sisters enter a cooking competition show to raise the money. Can they cook up a win?
Predictable plot with insta-love dominate this not-a-Christmas-movie feature. Drama seems forced and then glossed over. An old woman exists just to set the family on the right path. The bumbling uncle is comic relief that is not funny. No chemistry exists between Gina and Nick. The amount of Christmas in this movie is less than Die Hard.

The reality show features three judges of varying pomposity, a host with slicked hair and bad puns, and the requirement of a "secret" ingredient each round. It (the competition part) was actually somewhat entertaining to sit through... and I don't like Master Chef. However, I don't feel like it was good enough to carry half the film. It almost seemed like the writers fit the plot around the competition concept without caring about what would happen the rest of the time.

I'd pass on this unless you're an extreme fan of cooking competitions. And, even then, I'd think twice. Christmas Cupcakes are stale and found on Amazon Prime.
at Saturday, December 19, 2020