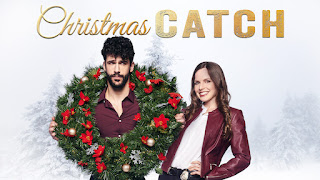 Detective Mackenzie Bennett is hot on the trail of Carson, a suspected diamond thief, and goes under cover to catch him in the act. While working, Mack not only falls for Carson but begins to suspect that he's been framed.
-Synopsis from Google.

Mackenzie's dating life is abysmal... until she meets a handsome guy. Of course, the guy is the suspected thief. She goes from making colossal mistakes in wooing him to being a natural without any reason for the improvement. It was "movie magic". The acting itself was decent, and there were a few cute parts that I chuckled at.

The score was typical for this kind of movie, and so were the decorations, outside of the white tree with white lights (ugh, no please!). It was basically all just... there. That's part of the problem with this movie: It's around Christmastime, but there's nothing inherently Christmassy. I'm one of those people who thinks a "Christmas film" needs to be more than just set around the holiday.

They did attempt to put a twist into the film, one that isn't as prevalent in this genre. However, the minute the character appeared on-screen, I knew exactly who she really was. A movie that incorporates mystery should do better than that. This wasn't supposed to be just another romance, so the lack of any real surprise was a letdown.

The number of near-miss kisses was approximately four or five. Too many, in my opinion.

Overall, it was just okay. It won't kill your brain cells to sit through, but I wouldn't go adding it to your Vudu colleciton. You can catch Christmas Catch on Amazon Prime.