Review: Halloween Ends... with a Whimper 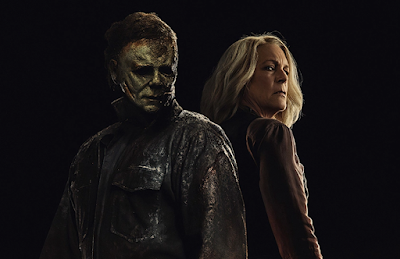 Four years since Michael last tried to kill Laurie (and managed to kill almost everyone else in the process), he comes back. Laurie is just trying to write her memoir and put the past behind her when she introduces her granddaughter to a young man who accidentally killed a boy he was babysitting years prior. That fateful introduction sets evil in motion.

Do you watch Halloween movies for Michael Myers? Well, if you're one of those people, you're going to be disappointed. Michael barely features in his own film. At the end of the last movie, he was slicing down people left and right in Haddonfield (gaining in strength with each kill). In Halloween Ends, he can barely muster up the strength to kill on his own and lives in a sewer.

The main villain of the film, for the most part, is the granddaughter's boyfriend. Corey was an outcast in town for the incident from years ago. After Michael drags him into his sewer but doesn't kill him, Corey changes. He becomes much bolder and decides to kill the people who have made his (and his girlfriend's) life hell. The kicker is that he uses Michael as his co-killer without any explanation as to how this works. I guess, if old Mike plays catch-and--release with someone, they're just psychically linked. Corey seems more murderous in this one than Myers and over half the movie is about him.

Corey is obsessed with Allyson (Laurie's granddaughter) and wants to be with her forever. I really hoped he was working towards trust with Michael so he could kill him... but nope. Why try to end the person who wants to kill the person he loves the most? Laurie and a couple of other people see how Corey changes; she eventually refuses to condone their relationship, so Allyson leaves and Corey tries to murder Laurie.

Before he tries to murder Laurie, he steals Michael's mask. He should not be able to do this. Michael can overpower 30 people wielding various weapons.

The climax of the film has Michael fighting Laurie because he follows Corey to get the mask back. After Laurie and Allyson subdue Michael, they strap him to the top of a vehicle and parade him around town. This is the same man who can be shot 20 times and stabbed 40 more and get back up like it's not even a hangover. But sure, tie him to the top of a vehicle without even beheading him first. He doesn't get up, though! They make it appear like he's finally dead. Corey dies before Myers does.

None of the acting was particularly good in this. I feel a lot of the performances were phoned in, which is not uncommon for a slasher flick. Sometimes, Jamie Lee Curtis even appeared bored. Corey's character development into the villain made sense, but it also isn't believable... more cardboard slip than dark descent.

The penultimate scene with the midnight vigil and Michael tied to the top of the car was bizarre. No one seemed to be carrying a shitload of weapons in case he gets up. No one demands the right to make sure that it is Michael on the car and not, say, Corey instead.

The kills, with the exception of one, were banal. I felt like they were on a tight budget and a huge time constraint, so the kills often cut away as though it was made for USA Network and not a theater. Michael often poses his victims in various ways (in prior films), and the presentation of his deeds fell flat here.

One of the worst parts, I feel, is the messaging about the shape of evil. Laurie talks about how evil changes form in her memoir. Michael Myers is called "The Shape" in the credits as though he's a damn isosceles triangle. They might be trying to say something profound or twisted with how Corey changes and what Michael is, but it just comes off as ephemeral and not concrete or interesting. I realize this is a safety hatch to resurrect Michael, but come the fuck on already! Halloween Kills hinted at something similar with how the town reacted when they thought they had Michael cornered in the hospital, but it was done much better.

The jumpscares were also lackluster and the tension was mostly non-existent. I paid for movie tickets, but I should have just streamed it on Peacock. If there is one saving grace, it's that I watched this with my baby brother and didn't suffer alone. I hope there are no more Halloween movies because the writers and directors murdered the legacy of Michael Myers harder than his sister ever could...