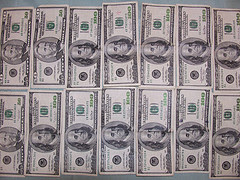 I received my first check for a poem in January! It was for $10 and I still haven't cashed it, though I run my fingers along it as though there is some mystery as to how I got paid and if I can do it again. This isn't the first time I was to be paid but this is the first time I have actually BEEN paid.

Has it changed anything for me? Well, at first I felt kind of validated but not in a lose-my-head-in-awesome-oblivion-and-become-a-maniac way. It feels really cool that I got paid to write and that it feels more like a career now instead of some odd obsession I can't shake.

Don't worry, it isn't a talisman against rejection. I received four rejections in three days last week so everything is normal there. But, maybe, the sting isn't quite as bad as it used to be.

What was your first writing payment like for you? Did you celebrate? If you don't have your first check yet, how do you imagine the scene when you first receive it?
***********
Photo: David Beyer
at Tuesday, March 20, 2012